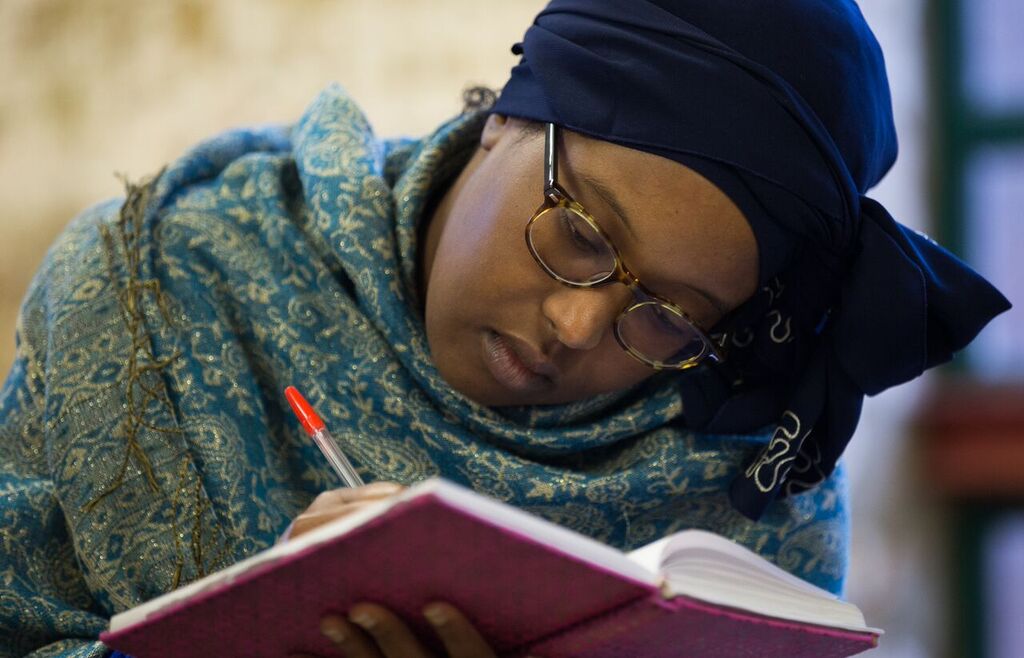 On Friday 25th the Bards showcased poems exploring ‘who we are’ and ‘refugee rights’ through poetry.

‘Bards Without Borders’ are a refugee and migrant poetry collective formed in 2015 to respond to the 400th anniversary of Shakespeare. Their multilingual poetry show, answering back to the Bard, toured over 20 venues in England including the Southbank Centre and Rich Mix. Supported by Counterpoints Arts’ Platforma Arts network, they have been developing new performances on the theme of patriotism and are delighted to be working with the Who Are We? project and Refugee Week. Follow them on twitter: #BardsWithoutBorders

Hamdi Khalif is a writer from London who was born in Mogadishu, the capital of Somalia. In 2015- 2016, Hamdi toured with her collective ‘Bards without Borders’ on their show, ‘Shakespeare is dead get over it’ tour! Hamdi is currently studying an MA in Creative Writing while also working on two publications: a poetry collection based on the experiences of Black Muslim women and a novel spanning three generations from colonial Somalia to modern Britain.

Edin Suljic grew up in the multicultural, multinational society of former Yugoslavia where he worked in engineering and theatre. He moved to the UK at the onset of the 1991 Yugoslavian war. His creative output includes writing for and producing collaborative theatrical work, poetry, short stories and essays as well as photography and short films. His poetry has been published in various magazines and pamphlets including Index On Censorship, The SHOP, Connections, Soul Immigrants and Finding a Voice. He is a member of Poets Collective ‘Bards Without Borders’ and a committee member of Exiled Writers Ink.

Laila Sumpton has been a member of the Keats House Poets since 2010 and is also an Associate Writer at Spread the Word. She facilitates poetry workshops and projects in hospitals, museums, libraries, parks, schools and universities – working with learners of all ages and abilities. She co-founded refugee and migrant poetry collective ‘Bards Without Borders’ whose show responding to Shakespeare toured England. Laila is published in several anthologies and magazines, has performed her work across the country and is working on her collection.