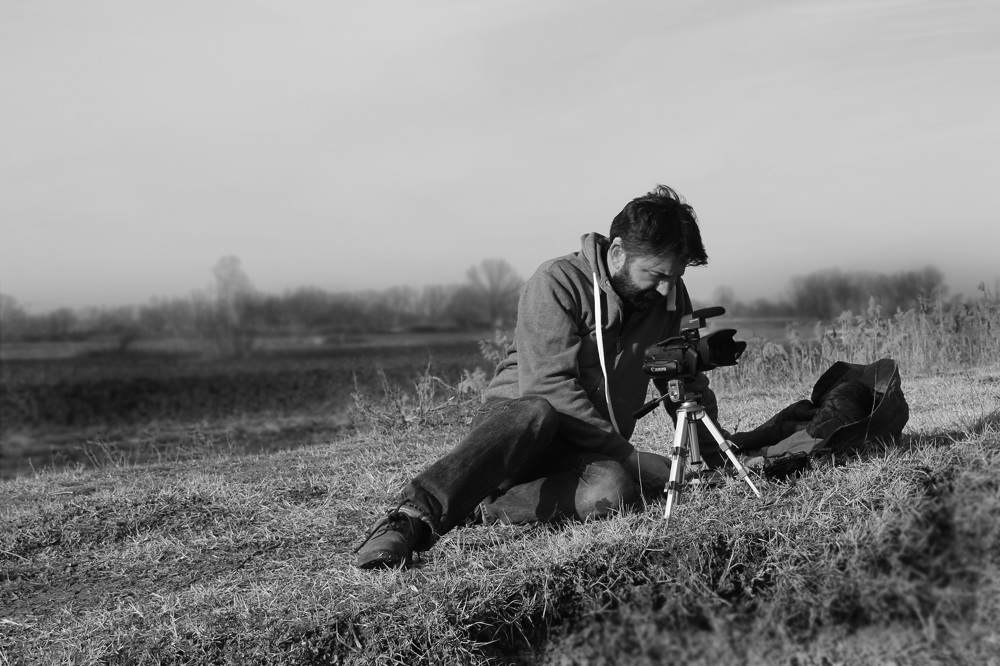 It’s the middle of the night. There’s a body beneath the sheet. From the fold of a shoulder to the crease of a knee: this cotton weave is wrinkled like weathered skin. The sheet moves, restlessly. It breathes: inhale, exhale: but the creature it encases stays in shadow. It stays in darkness. I feel its pulse from the fabric’s manic twitches.
There’s a body that showers. Its outline is fuzzy, as if not fully there. Armpit, neck, hair, hands: the body rubs its disintegrating container, determined to wash away the dirt. And see the painful memories disappear. Meanwhile, time creeps forward. A clock fixed to the wall says 3.44 (am).  There’s a body on a hill that shrouds the sparkling city lights below, engulfing that drifting place with its drifting presence. His checked shirt is only briefly illuminated, before he wanders out of sight. There’s a body; it moves: before puffing into dust.

The body of this darkness, this black-and-white world, is the anonymous protagonist of Juan delGado’s multimedia installation, Altered Landscapes (2016) – the first part of his Drifting Narratives trilogy. To drift is to be carried away, by a current of air or water; it is to move without a concrete destination. It is to relocate, transfer, shift and gravitate. Drifting is full with desire, but it’s a desire that can get lost and confused along the way. The drifter of Altered Landscapes inhabits this roaming desire, as a collaged series of monochrome images – paired with a first-person diary narration – capture the movement of his migration. He’s left his home country, ripped apart by civil war.

As a result, his body is fragile, like a floating leaf being carried by the wind. He’s been separated from his loves. He is changing, metamorphosing into something else, as if an insect wriggling free. Without any clear sense of belonging, this character cannot be pinned down. And so, the narrative instead circulates around the materials and buildings he touches and brushes against as his travels enfold, and his homes mutate from one country to the next. Greece; Macedonia; France. Rivers run and drift; skinny branches spin loose in the breeze. Fields open up to find buildings. There are cracks in these once mighty, Grecian ruins. Places slip and slide, with the rush of time and his onward footsteps, escaping the past as he reaches somewhere new, however temporary that might be. Left-behind mattresses suggest a fleeting motel. Discarded items of rubbish become the traces of human activity. These are the forgotten objects of his drifting, the parts of him that we are left with, as he journeys ceaselessly on. He must shed his irritated skin, as he searches for light and hope through the dark and foggy mist. Over the barbed wire fence, and into the blank white haze. It’s hard to say what the sun will bring.

As with many of delGado’s films, Altered Landscapes tracks the displacement of a refugee through a subtle transitioning from darkness to light, and through the accumulation of things rather than portraits. For so often do refugees’ personal stories get smothered and smeared by generalized media images; Altered Landscape’s invisible protagonist inhabits and critiques this silence. And it’s a silence that feels intimate, affective and raw, as his memories become occupied by metonyms, suggested by a bleak panoptican tower and the constant feeling of being watched, or a small black comb lost to some wheat fields calling to mind a rushed morning getaway. In refusing to appear, Altered Landscape provides the refugee (the protagonist of the film is in many ways a stand in for the thousands of others) with a mysterious, powerful agency. It draws our attention to the small, everyday details of the epic journey. It allows him to escape: a chance – at least – for freedom.

The research for Altered Landscapes began with the online platform delGado initiated in 2013. Called Qisetna, it is a space for Syrians, and people with a connection to the country, to share their stories as an inclusive alternative to the predominant media coverage. It focuses on the everyday, the intimate and particular, across themes of sport, food and the arts, and gets released as a monthly newsletter like a personal arrival of information. While Altered Landscapes and Qisetna specifically address the refugee crisis caused by the Syrian war, which has resulted in thousands of civilians seeking asylum in Europe, in horrific humanitarian conditions, previous works have taken him to Colombia (The Flickering Darkness (Revisited), 2014), Palestine (Fluctuations on Time (Fluctuating Fragments), 2011) and Morocco (Flèches Sans Corps, 2003), where he has explored narratives of trauma, loss and history.

The Flickering Darkness (Revisited) was produced during a three-month residency in Bogotá and explores the economic politics and social hierarchies that circulate around the population’s experience of food, across three interconnecting films. We witness the drifting trajectory of produce, as it moves from the hands of the hardworking night worker in the factory, to the feverish hands of the chef peelings vegetables, to the slippery hands of the restaurant diner devouring her prawns. Like Altered Landscapes, it begins in the middle of the night: a cityscape peppered by shifting lights of activity that determine who is at work and who is asleep. And like Altered Landscapes, it tracks the traces of bodies and objects that journey through lines of displacement. Sailing Out of Grain, an earlier work from 2012, is formed out of a similar desire for movement, in which delGado creates a mesmerising portrait of Hilary Lister: the British yachtswoman who became the first disabled woman to sail solo around the UK in August 2009. This work forces the viewer to recognise the overwhelming power of this woman’s medically imperfect body.

As an artist that suffers from a hearing disability, this desire to expand representation to include discriminated bodies like Lister’s, or indeed the thousands of Syrian
refugees travelling across Europe, is the driving political force behind all of Delgado’s films. It will shape the second and third parts of Drifting Narratives, titled Troubled Waters and In the Shadow of the Midnight Sun. The latter revolves around a displaced Syrian citizen, seeking refuge in Northern Sweden: he is as destabilised by his homelessness, as he is by the increasing precariousness of our planet. Across his past and future films, delGado makes material the desiring traces of marginal groups who drift in search of home, hope, and transformation. Their drifting is their cause. delGado gathers their stories.